Each one of the Betta’s two eyes, located on opposite sides of the head, produces a different image. This is known as monocular vision. A Betta (which can focus on objects up to about a foot away) finds it difficult to focus both eyes on a single object.

It, therefore, lacks depth perception. In humans, the shape and curve of the eye lens is constantly changing in order to achieve proper focus. In a Betta’s eye, the lens remains the same shape. Ligaments focus the image by moving the lenses backward or forward, like a bellows on an old-fashioned camera. 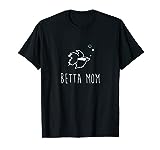 A Betta cannot adjust to rapid changes in brightness, because the iris works
too slowly. Thus, it will act “shocked” and panic when an aquarium light is
turned on or off suddenly. To avoid this, always turn the room lights on or off before turning the aquarium light on or off.

A Betta lacks eyelids, so it can’t close its eyes for a good night’s sleep. Instead, when your Betta tires, it will rest either by lying with its abdomen on the gravel or by hanging motionless in the water, just floating.

The swim bladder automatically maintains this position. Bettas sleep for short periods at various times during the day and night, so perhaps we should say they take frequent naps.

Because it has relatively poor vision, the Betta relies on its lateral line to locate nearby objects. The lateral line runs down the Betta’s side from the back of its eye to the base of its tail fin.

Small holes along the lateral line enable water pressure to affect specialized nerve endings. The pattern of water pressure, which is influenced by the shape, size, and movement of objects in the vicinity, stimulates the nerves to signal the brain.

The fish’s brain interprets the nerve signals as an image of the Betta’s surroundings, enabling it to find food, avoid obstacles, and detect the stealthy movement of a predator.

Each of the Betta’s ears is composed only of a simple inner chamber, because sound in water travels much faster than it does in air. Vibrations that are picked up from the Betta’s environment pass over the sensory components in the chamber to provide sound.

Scientists believe the swim bladder also works together with the Betta’s inner ear to amplify and distinguish individual sound patterns.

A Betta’s taste buds are located on the mouth, lips, and fins. Smells are taken in through the nostrils. Both senses serve the Betta’s needs by responding to chemicals in the water. Such chemicals can signal the presence of food or warn of an approaching predator.

The Betta can only detect chemical sensations over a short distance. Therefore, it must constantly forage to find enough food – unlike some fish, such as sharks, that can sense the taste of a potential meal from miles away.

In the wild, Bettas live in poorly oxygenated water, such as swamps and rice paddies. The Betta’s special labyrinth organ evolved to extract oxygen from the air when needed.

The labyrinth is a unique respiratory organ and is found in the suborder Anabantoidei, which also includes the Paradise Fish and the Croaking Gourami.

The labyrinth organ enables oxygen to be absorbed from the air directly into the bloodstream. Many fish can swallow air and absorb oxygen through the gut lining. An outgrowth of the gut, the labyrinth organ appears to be an evolutionary refinement of this technique and clearly provides a survival advantage in the often oxygen-poor habitats favored by anabantid fishes.

The labyrinth is located inside the head, just behind the gill section. This organ consists of rosette-shaped plates containing thousands of blood vessels that absorb oxygen from air the fish has inhaled. The winding shape of this organ is the basis of the name labyrinth, which means “maze.” The multiple folds of the organ maximize the surface area available for oxygen absorption.

Because Bettas breathe air, they can survive in less space than the average tropical fish can. (Water holds much less oxygen than the same volume of air.) This enables commercial breeders to keep the males in separate compartments until they are ready to be shipped.

Unfortunately, many hobbyists believe that because of this unique physical characteristic, Bettas can be kept safely in crowded conditions. Fishkeepers must remember that Bettas add the same amount of waste to the water that other fishes do, and are just as susceptible to disease brought on by overcrowding and poor water conditions.

Bettas should never be kept in small bowls for long periods of time. It will benefit their health, in the long run, to keep them in larger aquariums that offer plenty of swimming space and stable water conditions.