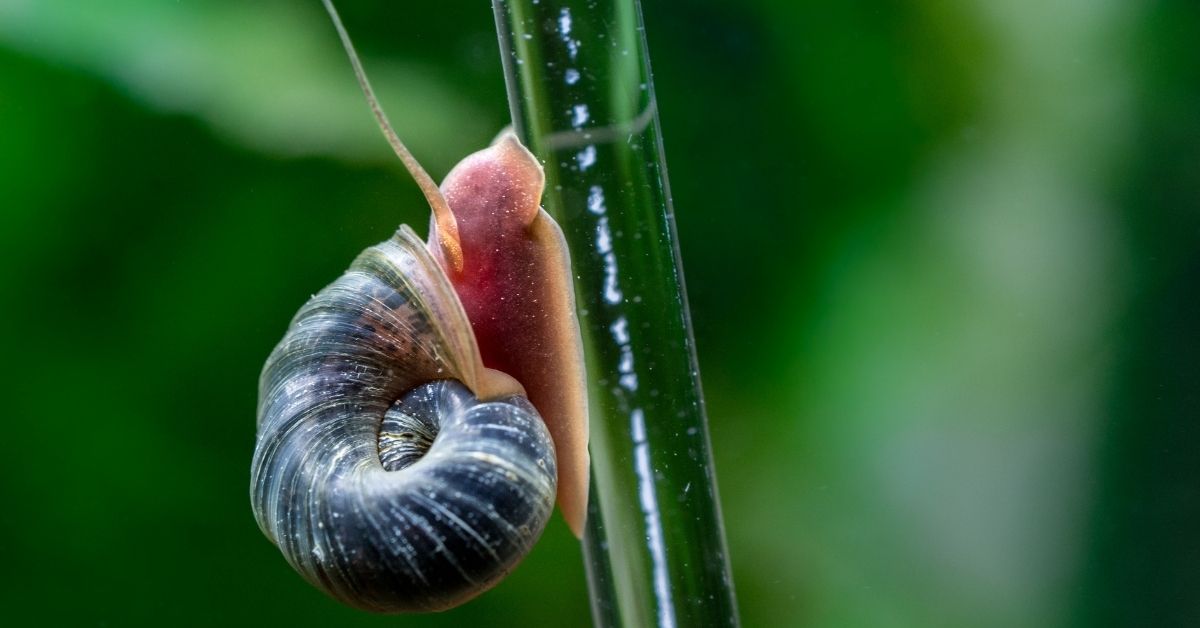 Ramshorn snails are a species that people get as pets or that accidentally sneak their way into a tank.  Their egg clusters often hide tucked away in live aquatic plants before introduction to a tank.  This means they come home from the pet or fish store unintended and can sometimes be a problem.

Either way, there are a few important informational tidbits you should be aware of, like what they eat, what they are, how they thrive, and why so many may one day end up in your tank.

Yes, Ramshorn snails often eat the dead and decaying material that falls to the aquarium floor, but some people do report them eating certain live plants.  This is because Ramshorn snails love eating soft plants with delicate stems and leaves.

If they do munch on a live plant, it has a lot to do with their feeding and how much nutrients it gets on a regular basis.  If you intend it as a pet, give the snail a variety of foods and a well-balanced diet to prevent them from eating live plants.

They’ll eat algae and fresh vegetables too, like seaweed, lettuce, cucumbers, and zucchini.  The only algae that Ramshorn snails aren’t interested in are Green Spot.  In the event of feeding them fresh vegetables, blanch them for a few minutes and allow them to cool.  This will soften the veggies to make it easier for the snails to consume.

What are Ramshorn snails?

Ramshorn snails are one of those that get lumped into one breed.  Their name comes from the spirals on their shells that resemble a ram’s horn and is the cause for much unnecessary confusion.  At pet and fish stores, they’ll sell Giant Ramshorn or Colombian Ramshorn snails.  These feature a shell with brown stripes across the entirety of the shell’s length amid a yellowish background.

What is the lifespan of Ramshorn snails?

If the Ramshorn snail eats well with ideal tank conditions, they can live a little under a year.  Any longer than that is pure luck but there are some reports of them living as long as three years.  However, it’s not uncommon for this type of snail to die shortly after introduction into an aquarium.

This could be due to stress from transportation, a severe shift in tank conditions, aggressive tank mates, or poor nutrition.  Although very hardy and tolerant little guys, certain upsets to their routine can cause them to meet an early grave.

Will Ramshorn snails become invasive to a tank?

Depending on how an individual aquarist, feels about it, Ramshorn snails can be invasive.  This is because they breed as fast as rabbits with a hermaphroditic capacity for reproduction.  They are prolific at producing young and takeover a tank with amazing alacrity.

Also, because of how much they eat and the manner in which their digestive system operates, they leave massive amounts of excrement behind.  You wouldn’t think that something so small can produce so much, but they do and sometimes it’s to the detriment of the tank.

What’s more, if you have something like shrimp, the Ramshorn snail will bully them out of their food.  They will, in a very literal way, kick the shrimp to the curb.

If you have a red Ramshorn snail, there’s an added concern with parasitic flukes which can and will infect other fish.  These flukes, called Trematodes, need intermediate hosts.  So you will have to keep the snail isolated for at least a month to take care of the problem.

How do I get rid of Ramshorn snails?

If you find your aquarium overtaken by Ramshorn snails, it’s most likely because they’re eating too well.  Reducing the number of nutrients entered into the tank should help to control overpopulation, but you may want to combine this with other methods.

There are some aquatic species that will feast on Ramshorn snails, which can also help keep the population down. Clown loaches, crayfish, many types of gouramis, and betta fish will all prey on them.

Because the most common way of accidental introduction into a tank is hidden egg clusters amid plants, you can treat the plants to prevent them from developing in the first place.  For harder plants, allow them to bathe in a solution of one part bleach to 20 parts water for about 10 minutes.

Amano Shrimp the Best Algae Eater for Your Aquarium

Avoid treating the roots as the bleach can damage them.  Always follow a bleach soak with a clean water soak.  Clean water should also contain some kind of de-chlorinator, like alum.  In a gallon of water, add five to 10 tablespoons alum and allow the plant to soak for two to three days.

You can also quarantine the plants and use a snail poison.  This way, you don’t have to introduce poison into the main tank.  Some hobby aquarists report dunking plants in saltwater for five to 10 minutes, but the water-to-salt ratio is unknown.

For manual removal, use a fish net to grab as many as possible.  For the rest, use a piece of cucumber or lettuce as bait.  At this point, you can choose to acquire a snail trap or you can just let them descend on the vegetation.  But the trap is ideal because it prevents the snails from escaping.

The other thing you can do to remove Ramshorn snails is to stop aeration to the tank.  Because they require airflow to thrive, they’ll climb to the upper surface of the water to breathe.  This makes it easier to take them out of the water with a net.  If you already have a planted tank, turn the light off for a while for the same effect.